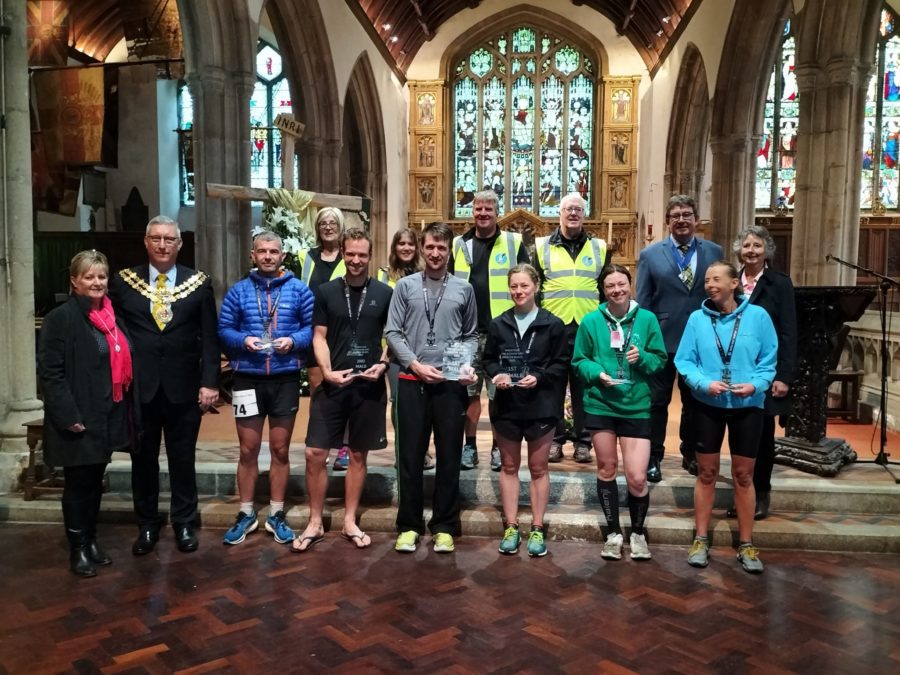 Thanks to the communities of Bodmin, Lanhydrock, Lanivet, Nanstallon and Cardinham working closely together with Bodmin Town Council, many community groups, organisations and individuals Bodmin’s first marathon named ‘Marathon – The Bodmin Way (Beacon Beast)’ was a huge success.

Pictured here (courtesy of Robert Dawson, Bodmin Camera Club) in St. Petroc’s Church are the Race Director’s Team consisting of Sharon Hambley (RD), Lesley Taphouse and Dave Bidgway. Barbara Brittain and Julie Bidgway were also part of the team, but unfortunately not available for this picture. Councillors, including the Mayor and Deputy Major of Bodmin, along with their Wives attended  with awards for the first three male and female finishers.

Following the event Bodmin Town Council gave the event a Sporting Achievement award, which had been created and planned in the teams own time over 18 months and donated all of the proceeds to 17 local charities/communities.

A full write up of the event can be found on the front page and page 5 of the Bodmin Voice newspaper on 18th May 2022.

It is hoped that this will become an annual event with the next one being pencilled in for Sunday 16th April 2023. More details will be on this web site as the plans progress – Marathon – The Bodmin Way (Beacon Beast !)