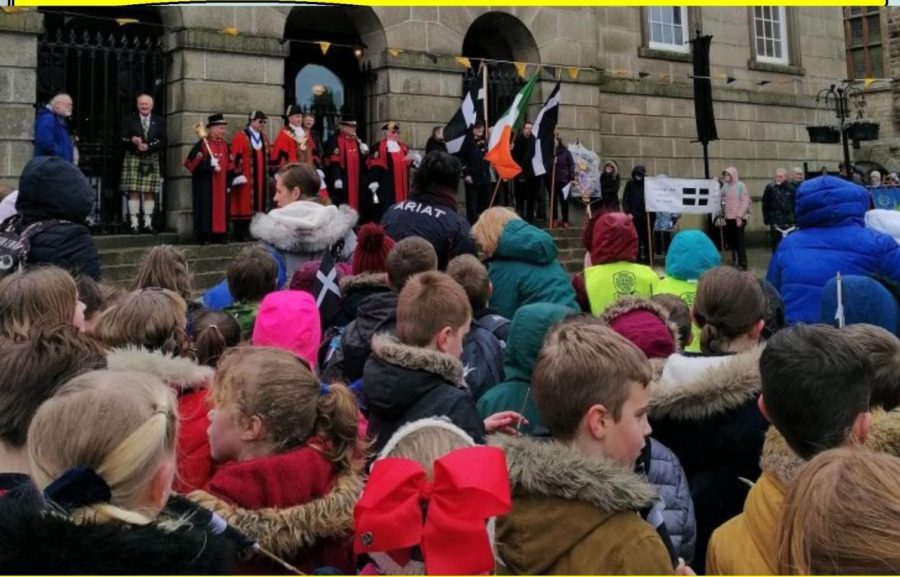 Bodmin’s twenty second St Pirantide celebrations will take place on Friday 4th March featuring the traditional parade which will assemble around the old Town Library in Lower Bore Street (from around at 10:45 am) for a 11.00 a.m. parade with Mayor of Bodmin, Councillor Jeremy Cooper to the accompaniment of a Cornish Piper to Mount Folly where Trelawny will be sung after the loudest “Oggy Oggy Oggy” chants in Cornwall and some short speeches.

Once again, some 300 + children from all Bodmin’s schools and the surrounding parishes, which includes Cardinham, Lanlivery, and Lanivet join for the most important part of the day’s celebrations. In addition to taking part in the parade, chanting, dancing, and singing, they will be performing in St Petroc’s Church after the march.

Bodmin Lion Kevin Marshall who chairs the committee which has been organising Bodmin’s 2022 St Pirantide Celebrations said: “Bodmin will be the only place to be. What makes Bodmin so special is that our day is about the children who are a fundamental and important part of this town and Great County’s future. Their enthusiasm is infectious bringing Cornwall’s traditions alive in a unique way not seen anywhere else. The Bodmin Joint St.

Piran Committee is delighted to see the event grow year-on-year and include children from neighbouring parishes, united under the umbrella of being Cornish and celebrating our Cornish Patron Saint.

As in previous years Bodmin is expecting to welcome Cornishmen and women from all around the country to take part.

Do come and join us on the day you will be more than welcome!